An Angry Young Woman Grows Up

When I was in my early twenties, living alone in my very first apartment, I spent my days chasing a creative writing degree and working my ass off in a preschool. My nights nights were devoted to poetry slams, reading insane amounts of  Pablo Neruda, working the local poetry open-mic circuit, and writing. Poems, mostly, but also also a fair amount of short fiction.

One of my friends at the time, a much older poet who happened to look a lot like Pablo Neruda, said my work was good but that it was "angry young woman" poetry, so it was hard for him to identify with it. Looking back, I think he was just trying to say something nice about something he couldn't understand.

When I look through the overflowing and torn folder that holds the writing from that period of my life, I realize I was an angry young woman and that my target audience was not tender-hearted fifty-year-old males. I had a bone to pick with the world, and words were my weapon.

I've changed a lot since then. I grew up. I realized that poetry isn't my passion. I got married and had a kid. Sometimes I can hardly remember the girl I used to be. But I still have a couple of things in common with her. I'm still mad as hell, and words are still my favorite weapon. 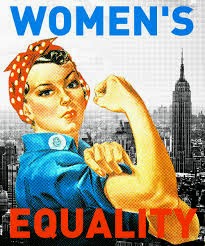 There are times when I feel overwhelmed with the world. I can't believe that there is so much hostility, hatred and injustice out there. Sometimes I feel like I'm being crushed under the weight of bigotry, misogyny, and ignorance. It makes me angry that women don't have a voice in their own healthcare. It infuriates me that the color of someone's skin determines how they are treated by law enforcement and society as a whole. Rape culture is alive and well as women are told to restrict their actions to avoid becoming victims.  Gay marriage is still controversial.

Although today is Women's Equality Day, there is still a lot of work to be done before women (and people of color, and the LGBTQ community) are truly on equal footing.  I look forward to the time when there will no long be a need for such holidays as Women's Equality Day. One day, we can all see and treat each other as equals, and I won't stop being angry until that time comes.
Email ThisBlogThis!Share to TwitterShare to FacebookShare to Pinterest
Newer Post Older Post Home
Tweets by @DannieMOlguin