Ask any writer what their least favorite, most dreaded phrase is, and it's a fair bet most would say "writer's block." Anyone who has ever put pen to paper or fingers to keyboard knows how awful it is when you know that you need to write but you can't find the right words to use.

We are wordsmiths. Say that word aloud. Wordsmith. Feel it form in your mouth and think about what it means. We are in the business of using words to create worlds. Words are our tools. We wield them like weapons, we wrap ourselves in them like a grandmother's quilt. Probably, most of us prefer writing to speaking nearly 100% of the time. I've known plenty of writers who prefer to handle business via email but few who prefer to actually pick up the phone and have a conversation. Words, reading them and writing them, are as necessary to me as drinking water. Words have given me escape in times of turmoil and stress. They have given me comfort in times of fear. They have given me an outlet when I felt trapped inside my own head, and perspective when I felt like everything was spinning out of control. 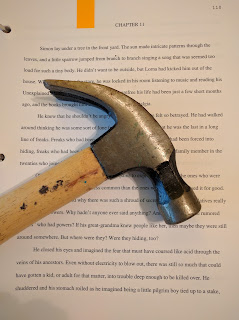 Unfortunately, being a wordsmith isn't glamorous or sexy. It's hard work. The words don't always cooperate. Sometimes they run away and hide. Or they stand there, defiantly just out of my reach. Or they run all over each other and I can't seem to put them in any kind of order. Sometimes, instead of a writer or wordsmith, I feel more like a word wrangler. I imagine myself, dusty and hot, standing on the edge of the Rio Grande, trying to wrangle defiant words safely across the river so they can take shelter and grow fat on the other side.

I'm not sure that non-writers understand that writer's block happens at all stages of the writing process. If you ask someone to visualize it, I think the most common image of writer's block is that of the frustrated writer, staring at a completely blank screen or a fresh page in a typewriter, unsure of where to begin, unsure of what's about to happen. But it can happen twenty-five thousand words into a novel. It can happen when you've outlined, it can happen when you think you know the ending. Hell, it's happening to me right now, and I'm just rewriting the thing. I know all the major plot points, I know how it'll end, I'm almost halfway through the re-write and I know what needs to be done, I just don't know how to make it happen.

It's not so much writer's block as it is mental constipation. I know that stuff is in there, working and churning, it's just not ready to come out yet, even though I'm bloated and trying to force it. It's awful and somewhat terrifying. I worry I might explode. I worry that I'll never find relief. I worry that if I push through, what comes out will not be at all satisfying. That it will, in fact, just be a half digested pile of crap.

So I look for something else to write. Something that will maybe loosen up the works. I do writing prompts or I work on a different project. Or I come here and make metaphors about cowboys and shit because being a writer at least gives me the ability to make ridiculous metaphors to entertain myself.

If you're a reader, how do you envision writer's block? If you're a writer, how do you combat it?
Email ThisBlogThis!Share to TwitterShare to FacebookShare to Pinterest
Newer Post Older Post Home
Tweets by @DannieMOlguin